The 102 EX Concept Car also known as Rolls-Royce Phantom EE (Experimental Electric) is powered by a lithium ion battery pack and two electric motors mounted on the rear sub-frame. The two motors of the vehicle, connected to a single speed transmission with integrated differential generate up to 389-hp and help the  Phanton 102EX to reach 60 mph in under 8 seconds. The Rolls-Royce 102EX Phantom top speed is 99mph and on a full charge it can cover 124 miles.

Regarding the design, the manufacturer said: “102EX bears the famous hallmarks of the Rolls-Royce Phantom on which it is based, such as hand craftsmanship, fine detailing and iconic design cues like the pantheon grille and the Spirit of Ecstasy which celebrates its centenary in 2011. However, at the core of its design is the essence of an experimental vehicle, establishing this car’s status as a test bed, while subtly alluding to its electric power plant.”

The legened of the Volkswagen Microbus returns in a new, modern form: the VW Bulli 2011. The new Bulli Concept is measuring 3.99 m in length, 1.75 m in width, and 1.70 m in height and comes in two-tone paint job with the distinctive V mark on the van front.

The Bulli interior comes in  3+3 seating configuration. The three rear seats are capable of being folded flat to maximize cargo space from 370 lyters to 1600 liters. On the Bulli dashboard  you can find a removable iPad with Internet, media center, phone and navigation.

The 2011 version of Volkswagen Bulli is an  electrical vehicle powered by a 40 kWh lithium-ion battery and a 85 kW electric motor bringing 113 horsepower and 192 lb/ft of torque to the new VW Bulli. It can reach 62mph in 11.5 seconds which is pretty good for an electrical van.

The new A-Class concept car from Mercedes Benz features a radical new look and brings up a strong rival for BMW 1-Series and VW Golf 7.

The new 2012 Mercedes A Class model will be built on a modular platform that will be the base for a series of 2012 new Mercedes models. The Mercedes Concept is powered by a 210-horsepower (155kW) 2.0 litre engine. The direct injection turbocharged four-cylinder engine  will deliver “high performance and minimal emissions and fuel consumption” according to manufacturer. A diesel engine will be also available together with a new dual-cluctch DSG gearbox. Later the new 2012 A Class model will feature an AMG badge with improved performance and a four wheels drive powered by a new turbo engine.

Here is a Mercedes Benz A Class Concept teaser video from Mercedes-Benz.tv

A premiere is also the included radar-based collision warning system with adaptive Brake Assist which gives a visual and acoustic warning to a possibly inattentive driver, and prepares Brake Assist for an absolutely precise braking response.

The new A Class dashboard is also very futuristic and includes a mounted Tablet.

The Miray Concept is a sports roadster and is powered by 2 front mounted electrical motors with 15 KW/ 20HP each. The car comes equipped with a 1.5 liter, 4 cylinder turbocharged petrol engine mounted in mid-rear configuration and supplying power to the rear wheels. The electric engines are powered by a 1.6 kWh lithium-ion battery pack that is recharged by a regenerative braking system. So the Chevy Concept car can run on electric power with extra power for the petrol engine when needed. 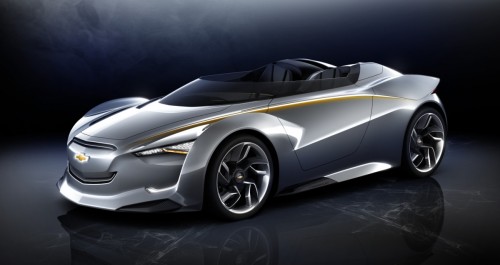 The design of the Chevrolet Miray 2011 Concept Car is inspired by classics as the 1963 Monza SS and the 1962 Corvair Super Spyder with carbon fiber body and 20/21 inch wheels (front/rear).

“This honor is even more special as it was given to Chevrolet’s first concept car displayed in Korea at the brand’s very first stand at a domestic auto show,…It recognizes Chevrolet’s future vision and new ideas. Chevrolet will continue to bring new vehicles with innovative design and technology to Korea.”

The Leicester firm’s latest model has been crowned the Noble M15 and it’s a radical development of the Noble M14 concept car shown last year.

Featuring the same twin-turbo, 3.0L V6 producing 455 bhp that debuted in the M14 concept last year, the new car model M15 might be crowned Britain’s baddest supercar. The engine is now mounted longitudinally and hooked up to a brand new gearbox packing six speeds for lunch.